With less than a month to go until the premiere of “Avatar: The Way of Water”, the production had its final trailer released this Monday (21). The new trailer shows more of Jake’s (Sam Worthington) and Neytiri’s (Zoe Saldana) family relationship and the battle Pandora will face with the humans threatening the Na’vi. To protect themselves, they invest in technology and training with sea creatures.

++‘Avatar: The Way of Water’ gets official trailer with stunning scenes

In an interview with GQ, director James Cameron revealed that he told the studio that the sequel was “the worst business case in movie history”, as the film had a budget of around $250 million. According to Cameron’s own estimate, the feature would need to surpass the box office of “Star Wars: The Force Awakens” (2015), the 4th highest grossing in history, with a revenue of $ 2.69 billion.

“Avatar: The Way of Water” opens in theaters on December 16th.

Sarah Hyland married in California in a ceremony performed by Jesse... 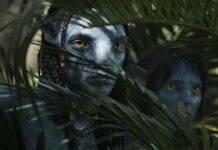