Avril Lavigne’s legacy will be recognized, the singer will be honored with a star on the Hollywood Walk of Fame. According to information from the Walk of Fame, the moment will take place on August 31 at 11:30 a.m. local time.

On her Twitter profile, Avril celebrated the news: “It’s official! I’m getting my own star on the Hollywood Walk of Fame”, she wrote.

“This isn’t Complicated, Avril Lavigne is very deserving of this Walk of Fame star and we are thrilled to be honoring her with this great honor” stated Ana Martinez, Producer of the Hollywood Walk of Fame. “Avril’s fans have been blowing up my phone asking when she will be getting her star. We are thrilled to say that the time is now!” added Martinez.

Lavigne has made history and is one of the top female artists in the music scene. Her debut studio album, Let Go (2002), is the best-selling album of the 21st century by a Canadian artist. “Girlfriend”, single from her third studio album, The Best Damn Thing (2007), was the first music video to reach 100 million views on YouTube.

In February of this year Avril debuted on Travis Barker’s DTA Records with the release of her seventh studio album, Love Sux. In June, the artist celebrated 20 years of her debut album with a special edition, which features 6 bonus tracks, including her newly recorded studio version of “Breakaway” plus rarities from the Let Go sessions.

The tribute ceremony will be streamed live exclusively on the Walk of Fame website. 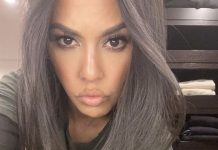 ‘I love being curvier’, says Kourtney Kardashian about her ‘thicker body’