Actress and singer Selena Gomez shows in her social media behind-the-scenes images of the second season of Only Murderers on the building, which is already complete on Hulu. Along with Steve Martin and Martin Short, the beauty is part of a successful team. The third season is already confirmed. According to Steve, this could be his last project before he retires. The investigation series attracts audiences of all ages and is the flagship of streaming.

In the series, the three main characters, who live in the same building, meet and become part of a group, after a murder happens in the building. The trio begins to investigate the case, as they all enjoy true crime podcasts. Season three will feature new faces, and more action. In addition, the protagonists will return. The cameos are also a major highlight of the series. In season two, icons such as Cara Delevigne, Amy Schumer, Shirley McLane and Michael Rapaport were in select episodes.

In the third season we can expect names like Paul Rudd, and new mysteries. In addition, the expectation is that the interval between seasons will be shorter, as productions in Hollywood are more advanced, post covid. With weekly episodes, the series brings interaction beyond the small screen, and proposes mysteries on social networks, as viewers are theorizing the next steps of the plot. The estimate is that the third season will start streaming between July and September 2023. 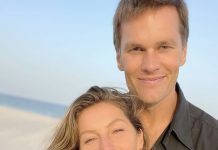 “There are things I’m going through,” says Tom Brady amid Gisele...