This afternoon at ‘Apple Worldwide Developers Conference’ at San Francisco’s Moscone Center this statement was made by Apple CEO Tim Cook, “Today we’re announcing Apple Music. It will change the way you experience music forever.”

“We’re pulling the cord,” said Apple’s SVP of software Craig Federighi, demonstrating that such music apps as Spotify and iHeartRadio will be able to operate without having to pull your phone out of your pocket or bag.

Jimmy Iovine, the founder of Interscope Records went on to explain: “I’m here because of 2003, the record industry was a ball of confusion. Technology was this giant invader from the North. So I went to Apple and see Steve Jobs and Eddy Cue and they showed me a simple, elegant way to buy music online — iTunes.”

“Now in 2015 music is a fragmented mess,” added Iovine of his desire to “build a bigger and better ecosystem. They can help move culture the way art moves culture. Tech and art can live together.   All the ways you love music all in one place. One single app on your iPhone.

Another Apple SVP, Eddy Cue, was next to take the stage where he tackled Internet radio. Said Cue: “Internet radio isn’t really radio, we wanted to do something really big, a worldwide radio station.”

The service will cost $9.99 a month with the first three months offered for free. For $14.99, up to six family members will be able to share the account. “It’s an incredible value,” added Cue.

The service will launch at the end of the month. 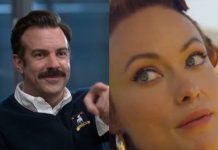