You can’t come after the King of Pop when you’re not even the jester of pop.

Everyone is entitled to their own opinion. But when you’re a celebrity, with thousands of followers on social media checking you every move and word, sometimes its better to keep your thoughts to yourself. Especially if they involve an ultimate LEGEND and forever #1 of billions.

Sam Smith was caught shading the late Michale Jackson in a video posted by Adam Lambert over the weekend. On the snap, the two musicians are listening to Jackson’s Human Nature on a boat with friends, when Smith is heard saying “I don’t like Michael Jackson, but this is a good song.”

Though Lambert quickly deleted the Instagram post, Sam’s words will continue to live on forever, thanks to the internet, who is understandably outraged at his surprising admission.

Guess the lesson here is to not shade Michael Jackson, not only because he is probably the single most influential figure in the history of pop music, but also because he paved the way for countless artist after him—including you, Sam! 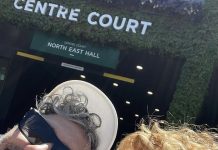 Taylor Swift Comes Back to Spotify With Full Discography