Charlie Sheen has blamed testosterone cream for his bizarre antics following his very public firing from hit sitcom Two and a Half Men.

The 50-year-old actor sparked many a meme online when he started ranting about his “tiger blood,” how he was constantly “winning” and his “warlock” status, but now Sheen believes the hormone supplement had negatively affected his behavior.

“That was a very specific period of time that did feel very out-of-body and very just detached from all things real,” he said in his appearance as a guest on The Dr. Oz Show on Thursday.

“I felt superhuman during some of that. It was a lot of highs and lows. I was taking a lot of testosterone cream, and I think I went too far with it.”

Sheen said he “cringes” when he looks back at some of his behaviour, which included publicly blasting Two and a Half Men creator Chuck Lorre. “That’s the stuff that I do look at [and] cringe a little,” he said. “It was nice to give people a bunch of slogans and T-shirts and all that. But the rest of it was a lot of work.”

“It was kind of like a borderline…not a ‘roid rage, but a ‘roid disengage,” he concluded.

Cheryl And Liam Payne Call It Quits And Twitter Is Not... 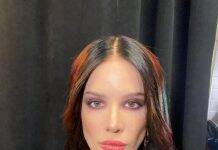