Mason, Reign, and Saint will have a new buddy to play with!

Neither Khloé Kardashian nor her beau Tristan Thompson have confirmed their alleged pregnancy (yet), but we already know the gender of the baby!

Multiple sources close to the couple say the reality star and NBA star are expecting a baby boy that will be born early next year, although we still don’t know and exact day or month.

According to the reports, Khloé, 33, is about to end her second trimester, although she is still trying to keep her healthy lifestyle, doing “more cardio” and “less intensive” workouts, due to the stage of her pregnancy.

Just like her baby bump (which she insists to hide), Khloé’s relationship with Thompson, 26, continues to progress. “Marriage is definitely in the cards,” an insider told Us. “They are just waiting for the right time to move forward. Khloé doesn’t want to rush into anything.”

Khloé, of course, is not the only one with a nursery to decorate. The news of her pregnancy overlapped (suspiciously, yet, surprisingly) with her sisters’, Kylie and Kim, who are each also expecting a baby.

Kylie, 20, is also becoming a new mom, along with her current boyfriend Travis Scott, although the rumor has yet to be confirmed… or denied.

Kim, 37, who is waiting for her third child with Kanye West, is having a second baby girl via surrogate. North and Saint’s mom spilled the beans about her pregnancy on the new Keeping Up With The Kardashians season trailer.

Now that the Kris Jenner has signed a contract for approximately $100 million dollars to renew the series through 2020, we’ll surely be seeing these little ones on the way grow in front of the cameras—nothing new for the Kardashian family! 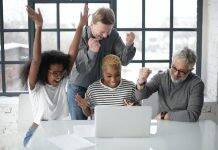