After four months of complete silence, Ariana Grande has made a comeback on social media announcing her long-awaited return to the music scene.

On Wednesday morning, the singer posted a message on Twitter announcing that on April 20 (yes, in just two days from today!) she will bless the world with what probably is her new single, titled No Tears Left To Cry.

The name of the song—which was written upside down, by the way—came shortly after Grande tweeted “miss you” followed by a what appears to be a tear drop emoji. Ariana’s family—her mom Joan and her brother Frankie—all tweeted the same emoji.

Although we still don’t know many details on Grande’s upcoming project, according to reports, the album will include collaborations with artist like Pharrell Williams, who has described Ari’s new material as “amazing” and “next level.”

The 24-year-old singer went on a temporary social media hiatus shortly after the deadly attacks at the Manchester Arena, where 22 people were killed at one of Ariana’s concerts. Her last public appearances include the One Love Manchester concert in support of the victims of the attack, and her performance on the March For Our Lives stage in Washington D.C., where she sang Be Alright.

Ariana’s last album, Dangerous Woman, was released nearly two years ago, during the summer of 2016, meaning that her fans are eager and more than ready to welcome some new material. 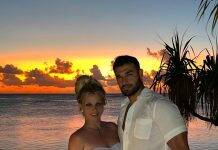