So Natalie Portman and Jessica Simpson got into an brief war of words when the actress criticized the singer for wearing a bikini while still being a virgin. And if this isn’t proof that ANYTHING is possible in 2018, then we don’t know what is!

Simpson fired back at Portman after she said she felt confused over the I Wanna Love You Forever hitmaker’s virgin image. “I have made it my practice to not shame other women for their choices,” Simpson wrote. “In this era of Times Up and the great work you have done for women, I encourage you to do the same.”

The unforeseen feud between Natalie Portman and Jessica Simpson caused mixed reactions on the issue. While some stuck up for Simpson arguing virgins should be allowed to wear whatever they want, other defended Portman saying her comments were misread.

Click through our photo gallery above to see the reactions to the online argument between Natalie Portman and Jessica Simpson. Man, those are two names we really never expected to see together in a sentence!

Austin Butler reveals how he became ‘Elvis’ in new video 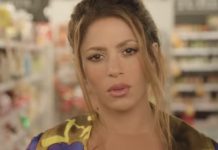 “Monotonía”: Shakira hits the top of iTunes in 10 countries