As the cast of Game of Thrones prepares for its final season, Kit Harington can’t help but look back on the show that boost his acting career. And while he has many fond memories on set, the actor said many scenes took a heavy toll on his off-screen life—particularly Jon Snow’s death and resurrection.

In case you forgot (I mean, how could you?), at the end of season five, Jon Snow was shockingly left for dead. However, there was endless speculation during the break between seasons that he wasn’t really gone for good—which, indeed, was later confirmed when Harrington’s character was brought back from dead in season six.

“When you become the cliffhanger of a TV show, and a TV show probably at the height of its power, the focus on you is f—cking terrifying,” the actor recalled in an interview with Variety. “I felt I had to feel that I was the most fortunate person in the world, when actually, I felt very vulnerable. I had a shaky time in my life around there.”

It was all this intense pressure and scrutiny, which Kit Harrington calls his “darkest period,” that made the star realize he needed help. “That was a time when I started therapy and started talking to people. I had felt very unsafe and I wasn’t talking to anyone.”

Kit Harrington will be back on screens for the eighth season of Game of Thrones in April 15. And though plot details are kept very strictly under wraps, we hope there is no plot twists as traumatic as Jon Snow’s death. At least for the sake of Kit Harrington’s mental health! 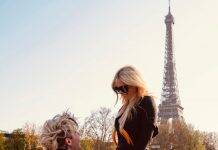 Avril Lavigne got engaged to Mod Sun at the Eiffel Tower Better Now! Post Malone confirms he will be a dad