Dakota Johnson and Chris Martin who have been together since October 2017, snapped up a white modern Cape Cod-style estate complete with a swimming pool, hot tub and home theater for $12.5million in October 2020, the New York Post shared on Wednesday.

The Southern California home was first placed on the market in July 2020 for $14million.

There are a total of six bedrooms and nine bathrooms in the home that is 5,338 square feet and has two levels.

The Post added a permit to build a tennis court is also included with the purchase.

The property is gated and has plenty of security for the singer and the actress; mature trees also line the property for added privacy.

The living room has a fireplace and stunning views of the Pacific Ocean and the surrounding mountains. And the kitchen is huge with a marble top island.

The master bathroom offers two counters and a stand-alone white tub in front of a window.

Johnson showed off her midcentury modern home last year which she snapped up for $3.55 million in 2016. There are no signs that she has put the property up for sale.

Dakota has had a number of difficult roles in the past and she previously admitted it ‘never got easier’ filming intimate scenes with Jamie Dornan in Fifty Shades of Grey.

She shared: ‘I really had to get ready for it each time and know exactly what we were going to do and how we were going to accomplish shooting the scenes, the more intimate ones. Over the course of the three films, it never got easier. It wasn’t like, ‘Oh, this old thing,’ you know?’

Last year Chris’ ex Gwyneth said she was still on good terms with Chris. And she gushed over Dakota.

Gwyneth ‘loves’ the star, and has been spotted spending time with Dakota, as well as Chris and Brad, several times.

She added to Harper’s Bazaar magazine: ‘I love her. I can see how it would seem weird because it’s sort of unconventional. But I think, in this case, just having passed through it iteratively, I just adore her. I always start to think of the ampersand sign – what else can you bring in, instead of being resistant to or being made insecure by? There’s so much juice in leaning in to something like that.’

A source previously said it was ‘very important’ for Gwyneth to ‘be on good terms’ with Dakota. 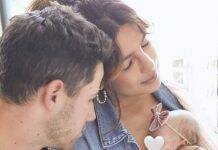